International Women’s Day is an opportunity to celebrate the achievements of women around the world. This year’s theme, #breakthebias, looks to raise awareness of bias and take action to forge women’s equality.

This year, we want to inspire and encourage women across our profession and in our client organisations.

We will, under our Inspiring women leaders series, interview and profile some of our clients, celebrating their achievements, sharing their stories, and inspiring others to achieve the very best they can in the workplace.

Whilst these interviews will focus on International Woman’s Day (8 March) they will continue throughout 2022. Do please share these stories and do get in touch if you would like to share you own experiences.

#BreakingtheBias – Ebru Koksal – a champion for women in football

Ebru Koksal is one of the pioneers of women in football. Her career has seen her lead the legendary Turkish club Galatasaray, elected to the Executive Board of the European Club Association, and appointed the first and only female General Secretary of the Turkish Football Association.

Today she is chair of Woman in Football – a network of professionals working in and around football who support and champion their peers. On International Woman’s Day, she speaks to the accountants Hillier Hopkins about her journey into leadership in UK and European Football.

Women’s participation in football has made great strides in recent years driven by the tenacity and dedication of truly inspirational individuals. Ebru Koksal is one such woman. But her 21-year career in the ‘beautiful game’ almost never happened.

“My career and progression into the sport was completely unplanned,” explains Ebru. “My career started in New York as an analyst with Morgan Stanley and then as an investment banker in my home country Turkey. Working in football was not part of the plan.”

But following the arrival of her two children and recurring sexual discrimination in the workplace, Ebru found herself in a position to take on the role as interim finance director of Galatasaray SK, Turkey’s most successful football team.

“I have always been a fan of the club – my father played basketball for them – and thought, ‘why not, let’s give it a try’,” says Ebru. “If it doesn’t work out, I could always go back to investment banking.”

After 11 years at the Club, Ebru was appointed General Secretary of the Turkish Football Association, elected to the Executive Board of the European Club Association, and a consultant to FIFA & UEFA.

Ebru’s 21-year career in European football may not have been planned but there can be no doubt that despite the challenges faced, she has shaped the role women play in some of our largest clubs whilst championing the woman’s game.

Women in Football was created as a support group and network in 2007 by a small group of female journalists. Ebru joined Woman in Football in 2015 and it has quickly grown into a powerful advocacy organisation with close to 6,000 members, giving a voice to women to argue for greater diversity at all levels of the game.

“This is not about ticking boxes. It is about driving meaningful cultural change,” says Ebru. “We work with organisations that want a more inclusive workplace. That might mean, for example, helping to shape recruitment policies, selection panels, making appointments, or supporting individuals in their careers.

“We work with women aspiring to get into the game whether at entry-level or mid-career.  We support and help develop career paths whilst, importantly, creating the pull from the decision makers of the football organizations.”

And it is thanks to the largely unrecognised army of passionate and professional women like Ebru that the women’s game is enjoying growing recognition from fans, clubs, sponsors and players.

“The women’s game needs to be patient,” explains Ebru. “The Premiership took two decades to achieve the stratospheric levels of funding and support it receives today. The women’s game is still in its infancy albeit growing at an exponential pace.

“We need more female coaches, referees and fans. The ecosystem must grow and we need men and women to make this happen. The success of the women’s game will open the door to greater opportunities for women across the entire sport.

“The visibility of women’s football and women in the game wherever they are helping drive greater inclusion. They are terrific role models.

Dream big – advice for women looking for a career in football

It has not been an easy journey to raise the profile of women in football, with Ebru facing criticism, questioning and outright discrimination for simply being a woman in what remains a largely white, middle-aged men’s world.

It is her stubbornness and insistence that women have a place in the game that drives Ebru.

“I want to show that I can survive and thrive and open the way for other women. It is not just for me – I want to show others what they too can achieve.”

There are many roles for women in football both on and off the pitch. And whilst many of the barriers remain, Ebru offers this advice.

“Build yourself the right network and support system. Continue to learn and invest in yourself and make the most of opportunities when they are presented to you.

“Dream big – there is no reason why Premier League Club’s technical director should not be a woman, why a top-flight club cannot be led or owned by a woman, or that we see a female FIFA president.

“They are all possible. We need courageous trailblazers.” 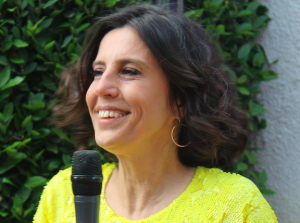