International Woman’s Day is an opportunity to celebrate the achievements of women around the world. This year’s theme, #breakthebias, looks to raise awareness of bias and take action to forge women’s equality.

This year, we want to inspire and encourage woman across our profession and in our client organisations.

We will, under our Inspiring woman leaders series, interview and profile some of our clients, celebrating their achievements, sharing their stories, and inspiring others to achieve the very best they can in the workplace.

Whilst these interviews will focus on International Woman’s Day (8 March) they will continue throughout 2022. Do please share these stories and do get in touch if you would like to share your own experiences.

Georgia Garinois-Melenikiotou has led an extraordinary career building some of the world’s most recognisable beauty brands for Johnson & Johnson and Estée Lauder. It is a career that has seen her travel the planet often with her children at her side.

It was, she tells Hillier Hopkins, a career that was entirely unplanned and one driven by love.

One of three girls to a Greek father who missed his dream to become an engineer as he did not go to school due to the second world war and a loving mother, Georgia having shown a talent for mathematics was encouraged to follow in her father’s dream. It was when studying nuclear engineering at MIT in the US that she realised that her passions rested elsewhere, switching to the business school.

On graduating she joined Johnson & Johnson and over the next 27 years built an astonishing career that changed the shape of the company.

“I met my French husband whilst working in Italy, and a year after, our son was born in Belgium” explains Georgia. “At the same time Johnson & Johnson was beginning to look at the skin care and beauty sector. I was given the opportunity to create and build that side of the business with the acquisition of several brands, starting with a French brand RoC.”

“When I purchased those beauty brands for Johnson & Johnson, I bought them for love,” explains Georgia. “That was interpreted by the media as love for the brands or for female empowerment.

“But the simple truth is that the love for my French husband was the driver. I wanted to live in France for a few years and have a base for our children’s schooling.”

After 27 years at Johnson & Johnson, working in seven different countries, and rising to its Global President for its Beauty Business, she moved to Estée Lauder in New York. It was, she says, another decision driven by love, wanting to follow her children as they decided to join Columbia and Cornell for their undergraduate studies.

“I have never planned my career,” says Georgia, “things just happened. Every step was entirely unplanned.”

Georgia recognises, however, that the ability to balance her stellar career and motherhood was made possible by Johnson & Johnson’s enlightened approach in supporting women in the workplace.

“Because of its baby business, Johnson & Johnson has a tradition of supporting women in the workplace that goes back over 50 years,” explains Georgia. “Its headquarters around the world all offer day care, meaning I could travel and take my children with me. It was a tremendous advantage.”

Large corporates could learn a lot from Johnson & Johnson, who rather than seeing the support to women colleagues as a cost, consider it as an investment.

“Businesses need to realise that motherhood over the course of a career represents a few short years,” says Georgia. “These investments create loyalty and enable women to continue to work at a stage when careers are really beginning to take off.”

Today, Georgia now sits on the Boards of a number of beauty and medical technology businesses. She is a strong advocate for gender parity in the Boardroom, arguing that it should be a necessity not just an obligation.

“There is a strong economic reason,” argues Georgia. “The investment society makes in, for example education, is largely equal between men and women, yet women often have to take career breaks to raise children when their careers are really taking off.

“Businesses need to invest in those few short years, enabling mothers to continue to develop their careers – that investment will be repaid many times over during their careers.

“These decisions will only happen when women have a seat and greater voice at Board level.” 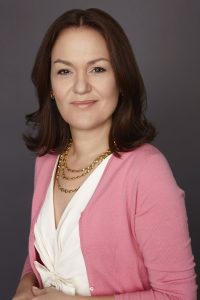